For our customers' protection, Apple doesn't disclose, discuss, or confirm security issues until an investigation has occurred and patches or releases are available. Recent releases are listed on the Apple security updates page.

Learn more about the new features in Logic Pro X.

One of the best ways to protect against issues with your projects is to save versions as you work. One strategy is to start each session by saving a version of the project with the current date as part of the name. You can save these versions of the project in the same project folder to avoid duplicating the assets. If for example you are working on a project named MyProject, and the current date is March 1, 2008 (2008-03-01), you could start your session by choosing File > Save As... and naming the new file MyProject 03_01_08. Each day that you work on the project, save a new version of the project with that day's date appended to the project name.

Logic also automatically keeps a backup history of the past 10 saved versions of a file. These backups are stored in a folder named "Project File backups" in your project folder. However, you can more easily find a version of your project that predates any issues by manually saving new versions as described above. Note that Logic creates a set of 10 versions for each project name within the project folder, so when you choose File > Save As... a new set of backups will be created, as shown here: 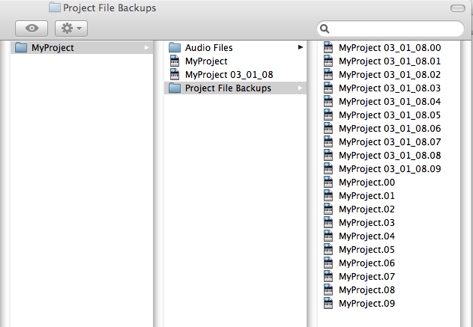 Use only validated Audio Plug-ins

To confirm you are only using plug-ins that have passed validation, choose Logic Pro< (or Logic Express) > Preferences > Audio Units Manager… Click Disable Failed Audio Units at the lower-left of the window. If you have any plug-ins that do not pass the validation test, check the manufacturer website for updated versions. 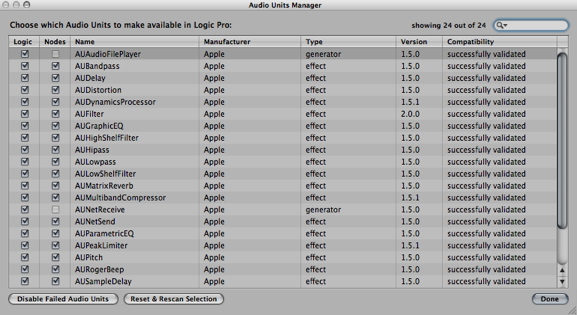 You can find the Logic Studio Support ID on the front of the Installing Your Software booklet included in the software box.

The front of the Logic Studio Installing Your Software booklet: 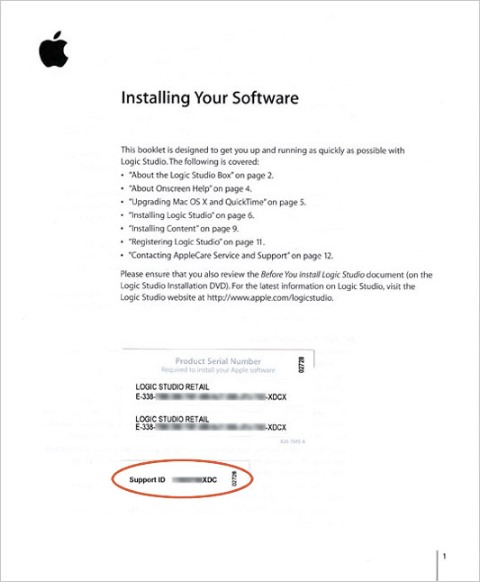 "Title and intellectual property rights in and to any content displayed by or accessed through the Apple Software to the respective content owner. Such content may be protected by copyright or other intellectual property laws and treaties, and may be subject to terms of use of the third party providing such content. Except as otherwise provided, you may use the Apple and third party audio file content (including, but not limited to, the Apple Loops, built-in sound files, samples and impulse responses) (collectively the “Sample Content”), contained in or otherwise included with the Apple Software, on a royalty-free basis, to create your own original soundtracks for your film, video and audio projects. You may broadcast and/or distribute your own soundtracks that were created using the Sample Content, however, individual Apple loops, audio files, sound settings, samples and impulse responses may not be commercially or otherwise distributed on a standalone basis, nor may they be repackaged in whole or in part as audio samples, sound files, sound effects or music beds."

This sometimes happens until the song is played for the first time after it's loaded. When you first load a song with tracks enabled for node processing, you may see that some of the track node buttons show that they are syncing data with the node:

Other tracks may show a node state of Enabled/Inactive:

After a short time, the tracks that show they are syncing may switch status to Enabled/Inactive. When you play the song, the node status for all node activated tracks changes to Enabled/Active:

The node buttons then continue to show the correct status even when playback is stopped.

It's normal for node enabled tracks to show the Enabled/Inactive status until the first play. Tracks that never show Syncing when the song is loaded simply sync so quickly, that the status seems to immediately show Enabled/Inactive.

To open the Audio Units Manager:

If you are having trouble opening Logic or MainStage and suspect an Audio Unit plug-in may be the cause, you can troubleshoot by manually removing plug-ins.

To disable any Audio Unit for troubleshooting purposes, simply move the file from one of the above locations to another one, such as the desktop, before opening Logic or MainStage. If you don't know which plug-in may be causing the issue, move them all from the above locations.

If Logic or MainStage behaves correctly without your Audio Unit plug-ins, you need to find out which one caused the erratic behavior. To do so, put them back into the original folder one after the other, or a few at a time, checking after each plug-in or group of plug-ins to see if Logic or MainStage still behaves correctly. As soon as the issue recurs, you've discovered the affected plug-in.

Logic offers several preset bank select message formats, but in some cases you will need to define a custom message format to change banks on a particular synthesizer. Most synthesizers use a combination of Control 0 &lpar;Bank MSB&rpar; and Control 32 &lpar;Bank LSB&rpar; events to trigger bank changes. MSB and LSB stand for "most significant byte" and "least significant byte," respectively. Consult the MIDI implementation chart for your synthesizer to determine the particular combination it requires for bank changes.

When you monitor audio in Logic and other audio software, it is necessary for the computer to buffer some of the incoming and outgoing data to protect against dropouts, clicks, or pops. The size needed for the buffer varies depending on factors including the speed of the processor, type of audio driver, sample rate, and more. In general, the more powerful the computer, the smaller the buffer can be without undesirable audio artifacts. The I/O buffer size affects the amount of "input monitoring latency" for the computer. Input monitoring latency is the slight delay you hear when you feed audio into your interface or when you playback software instruments. The smaller the I/O buffer size, the less delay you will hear.

Here are settings that may directly affect the amount of latency you will hear when monitoring audio through Logic:

The quotient of the buffer size and sample rate are multiplied by two to account for both the input and output buffers.

Lower buffer sizes and higher sample rates may result in less monitoring latency, but these settings require more computational power. If you set the I/O buffer size to a value too low for your computer to handle smoothly, you may hear dropouts, clicks, pops or other artifacts in the audio. In some cases, these may be saved to your recorded tracks and may be a challenge to remove later. Likewise, higher sample rates require proportionally more computational power, so higher sample rates also require higher I/O buffer size settings for good performance on a computer. The type of audio interface you are using also may affect the optimal buffer size setting. It's not recommended to use a setting lower than 128 with Firewire interfaces. It may be possible to set the I/O buffer size as low as 64 on PCI/PCIe based systems.

In Logic 8 and 9 you can fine-tune the monitoring latency with another setting:  I/O Safety Buffer.  When you select this option, an additional buffer is added to the I/O buffer size.  Simply put, with this buffer you can select "in-between" settings.  In most cases, you can leave this option unselected.

The roundtrip latency when playing software instruments live through Logic will typically be less than when monitoring audio. It is the sum of: