The Conservatory of Recording Arts and Sciences recently began building two new rooms based around the Solid State Logic AWS series analog recording consoles. The two rooms, one built in the Mesa, AZ facility, and the other built in the Gilbert, AZ satellite location we’re both in need of an elegant, functional and ergonomic furniture solution for the AWS consoles. Currently there are only a few furniture solutions for the AWS consoles, and none of them were ideal for the new CRAS studios.

Working with Mike Jones, Director of Education for CRAS, Audio Perception’s David Knauer designed a custom desk solution to house each AWS console without the included legs. The way the console mounts is unique and well thought out. It supports the weight of the mixer, and securely holds it in place. 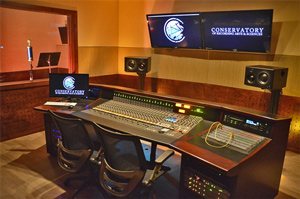 David designed the wood desks to match the contour and curves of the SSL AWS mixer, giving it the appearance of a large format console. Included the design is rack space for outboard gear, and a bridge for near field monitors.

Both new rooms now have the custom desks and AWS consoles installed and working. The end result is a very professional presentation of ergonomic design and functionality. CRAS is thrilled with the end result.