The Edit button for EXS24 is only visible if both Show Advanced Tools and the additional option for Advanced Editing are enabled in Logic Preferences.

To view the Edit button: 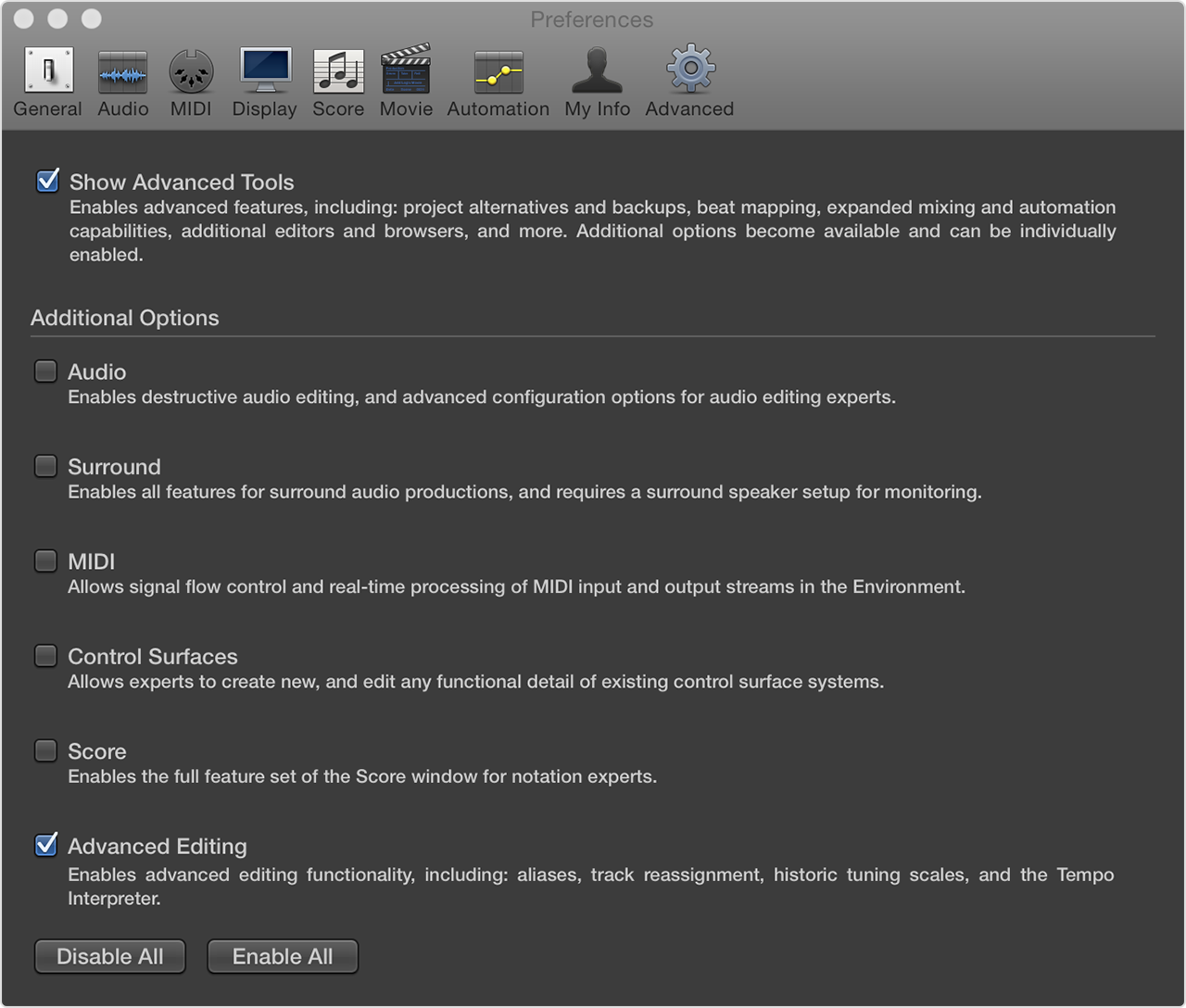 The Edit button is now visible to the right of the Instrument menu:

When you work with audio in Logic, several areas of your computer are put to work. When Logic records and plays back audio tracks it needs CPU power and hard disk I/O capacity. Audio DSP effects and software instruments require CPU power and RAM. No computer has infinite capacity in any of these areas and there may be times when a Logic project will require more power than your computer is able to deliver at a given moment. When this happens, the System Overload message appears.

Seeing an overload message doesn't generally mean anything is wrong with Logic or your computer. This is just an indication that there is not enough CPU power, RAM, or hard disk bandwidth to do what the song is asking at the time. The following sections offer help with assessing when Logic might need too many resources and strategies for avoiding this.

You can get an idea of how much of your computer's capacity is in use by looking at the System Performance window. Find this by double-clicking the CPU meter in the LCD (you must set the LCD to Custom view).

The window has two meters.

The first step in preventing system overload messages is to make sure your computer is optimally configured.

Sample Rate
The song's sample rate directly affects the CPU and hard disk load. For example, if you double the sample rate from 44.1 kHz to 88.2 kHz, you double the amount of data that must be streamed from the hard drive for each audio track to play. The CPU also must work harder to process the audio. Don't necessarily assume that the highest sample rate your audio interface supports is the best one to use. Always balance the considerations of audio quality, anticipated delivery medium for the final product, and computer performance when selecting the sample rate for any project

Workflow Strategies
There are several working techniques you can use to minimize the load on your computer as you work with Logic Pro X.

The EXS24 sampler instrument offers an option to stream samples from disk rather than load them completely into RAM. To access the controls for this, click the Options button in the upper-right area of the EXS24 window and choose Virtual Memory.

Use Aux channels to share CPU intensive effects among multiple tracks. Whenever possible, avoid putting reverbs and delays on individual channels. Put them on an Aux and send to them from each track. If a track requires a different sounding reverb than the rest of the song, try a less CPU-intensive reverb like the SilverVerb or PlatinumVerb. If you are processing multiple tracks with the same EQ and/or compressor, insert the plug-ins on an Aux. Then, set each track you want to process to output to that Aux.

Under Logic Pro > Preferences > Audio > General, there's a setting for Sample Accurate Automation with three possible settings. The default is "Volume, Pan, Sends," but you can also set this to Off or "Volume, Pan, Sends, Plug-in Parameters." The more automation parameters set to be sample accurate, the more load may potentially be placed on the CPU.

Additional content is 35 GB, which could cause issues with your Internet connection.

To resolve the issue, first make sure you're running the latest version of Logic Remote. To do so, check that your iPad is logged in to the App Store with the same Apple ID you originally used to download Logic Remote. Tap Updates in the App Store, and install Logic Remote if it is offered.

If you're already using the most up-to-date version of Logic Remote and the issue continues, use the following steps.

In Logic Pro and Logic Express, you can play compressed audio formats such as AAC, Apple Lossless, and MP3 directly in the Arrange window. Because these files require less disk space, you might think that they would also require less processor and disk drive bandwidth to play back. However, directly playing compressed audio may require more of your computer's resources than playing back an equivalent number of uncompressed audio tracks. This could result in lower track counts.

In some situations, you may get better performance by converting your compressed audio tracks to AIFF or WAVE files.

To do so, select the relevant regions in the Arrange window and choose Arrange > Audio > Convert Regions to New Audio Files. A file selector will appear, allowing you to choose a destination and file format for the converted files.

What advantages are there to using 64-bit mode?

The main advantage is that you can address vast amounts of memory. With 64-bit mode, the application memory is not limited to 4GB as with 32-bit applications, so there is essentially no practical limit by today's standards. As a result, all the installed memory that is not needed by the OS is available for use by Logic Pro or MainStage and all the included plug-ins, which can be meaningful if your Mac has more than 4GB of memory installed. This larger amount of memory allows you to run far more instances of memory intensive plug-ins, such as sample-based software instruments.

This setting allows you to specify the maximum number of audio rendering threads Logic will open at any given time. The options available depend on the number of physical cores your computer has, and whether it supports Hyper-Threading. The default setting is Automatic. This setting selects the option that should provide a good balance of performance and reliability for your computer.

It is also possible to manually select a particular value for this parameter. Click on the Processing Threads drop-down and select the maximum number of threads Logic will create. The first setting below "Automatic" represents the largest number of threads Logic can create on your computer. This corresponds to the maximum number of cores that your computer offers &lpar;the combined total of physical and virtual cores&rpar;, with a limit of 16. You can reduce this number in multiples of two. After you make a change to the setting, click the Apply Changes button to activate it.

There are numerous factors which influence how the OS distributes the workload to the cores on your Mac. The optimal value for the Processing Threads may vary not only for different configurations but for different types of Projects. Selecting the highest value may not always be the best choice. You will need to experiment to determine which setting provides the best balance of performance and reliability with your setup and particular Logic Project.

The versions of Logic Pro, Logic Express, and MainStage listed below are compatible with OS X v10.7 Lion.

There are two basic ways to bring a Standard MIDI file into Logic. You can either open it as new project, or import it into an existing Logic project. In either case, all the MIDI note and controller data on each included track is brought into Logic, but there are some differences in how global project data such as tempo and time signatures are handled.

Opening a MIDI file as a new project

When you open a MIDI file this way, all global project data including tempo and time signatures are included. This may be a good workflow if you are using the MIDI file as a starting point for your project.

Importing a MIDI file into an existing project

You may want to add data from a MIDI file to an existing Logic project. In this case, you can import the MIDI file rather than opening it as a new project.

In this workflow, all the tracks are imported, but tempo data and time signatures are ignored, preserving the existing global data in your project.

Note: You can also import a MIDI file into a project by dragging the file from the Finder onto the Arrange window.

Information about products not manufactured by Apple, or independent websites not controlled or tested by Apple, is provided without recommendation or endorsement. Apple assumes no responsibility with regard to the selection, performance, or use of third-party websites or products. Apple makes no representations regarding third-party website accuracy or reliability. Risks are inherent in the use of the Internet. Contact the vendor for additional information.