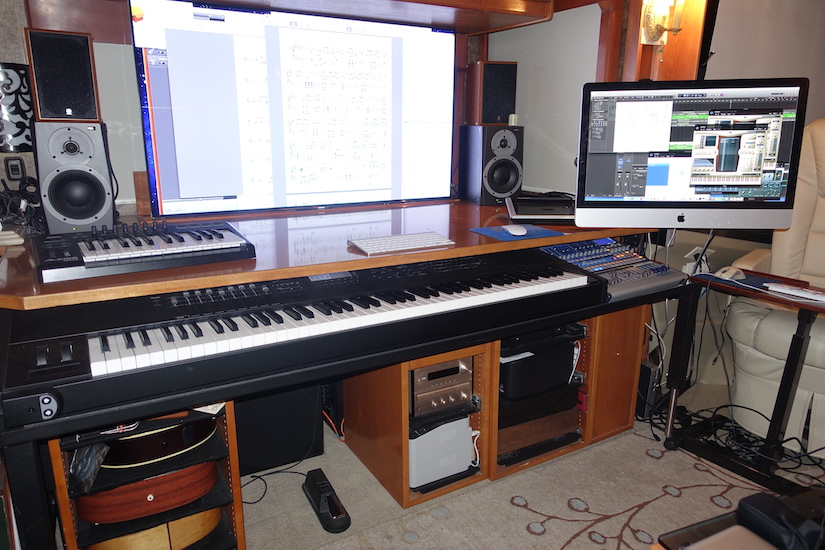 A composing and writing studio on wheels? That’s what Phil Rorex wanted to setup in a class A motorhome! Audio Perception’s David Knauer and Jason Atkinson first met Phil Rorex and his wife, Janet, at the 2013 Taxi Road Rally. They stopped by the Audio Perception exhibitor table at the Taxi event, and struck up a conversation about the feasibility of their plans. Since Phil and Janet are both songwriters, they wanted to set up a writing studio in a motorhome that they would also be living in on the road, in various locations. But first they needed to sell their house. Some time went by, and with their house finally sold, it was time to commence with planning and installation of the rolling studio. David worked with Phil to plan the layout and wiring, and Jason, with the help of AP's lead wire tech Steve Marlowe, tackled the install. Needless to say, it was a bit of a challenge performing the install in quite limited space.

The motorhome had some customizations, which included a desk along the living room driver side that moves in and out with the wall section. With extremely limited room, much of the gear needed to reside underneath the large desk, which included a custom made quiet rack for drives and a mac mini, as well a regular rack for various midi sound modules, midi interface and UPS battery backup. In addition, there was accessible storage under the desk for a CD player/AM FM stereo, printer, and record player as well as storage for several guitars. There is also a metal keyboard stand on casters with a small hydraulic lift engine to raise or lower the 88 note keyboard controller and Presonus Studio Live 16 channel digital mixer. The hydraulic keyboard stand had to fit in between the top of the items under the desk and the bottom of the desk itself. The main reason for this is that the entire wiring rig needs to collapse along with the driver side wall for making the motorhome mobile. When the expanded walls are retracted, the interior of the bus gets much smaller. An interesting part of the install involved a solution for cabling that connects the keyboard and mixer, which reside on a moveable metal keyboard stand, to the equipment under the desk. To accomplish this, the bulk of cable, which included midi, audio and power, was carefully tied into a snake partially tied to the stand, and a flexible portion extending from the keyboard to underneath the desk, with enough slack that can drop down when the keyboard is tucked under the desk, and lift upward to give the necessary length to pull the keyboard stand out. There is also a subwoofer placed inside a lower cabinet that Phil just opens when using the writing rig. The only visible equipment on top of the desk are the iMac that he uses to write with, using Logic Pro X, the studio monitors, various iPads and drum machines, and a large LED television connected as second display for the iMac.

Overall, the motorhome writing studio turned out great, and Phil and Janet are both excited to get back to creating music. Since it's completion they have moved around a few times, and at each stop, they just open up the sides of the motorhome, and the studio was there ready to go. They now have the freedom to go anywhere they want to work in their true rolling studio.