GISHWHES, which stands for the Greatest International Scavenger Hunt the World Has Ever Seen, is a 5-time Guinness World Records breaking scavenger hunt hosted by Misha Collins that you can compete in from anywhere in the world. Thousands of participants from more than 100 countries build their own teams and, for one week, they acquire items on a fun, inspiring and sometimes jaw-dropping scavenger hunt list. The items are “captured” as videos or images and uploaded to the GISHWHES website to memorialize the annual experience and to supply the judges with something to judge. The more sublime and creative a submission is, the more points awarded. Items range from the sweet and touching (perform a sock puppet show at a children’s hospital), to the weirdly sublime (a fully dressed storm trooper cleaning a pool next to a sunbather), to the absolutely impossible (get the word “gishwhes” written on something in space), a team actually pulled that off! "We try to create a list that is challenging, thrilling, and absurd. We like to see items that make us tear-up and laugh out loud. We like to have participants break out of their comfort zones, re-awaken their inner artist, and do a bit of good in the world." The team that scavenges the most items, with the highest quality of submissions, joins Misha Collins on an all-expenses paid trip to an exotic locale. Prior winners journeyed to Rome, a haunted castle in Scotland, an island off the coast of British Columbia, and a pirate ship in Croatia. This year the winning team will be joining Misha and his favorite spider monkey in Costa Rica. 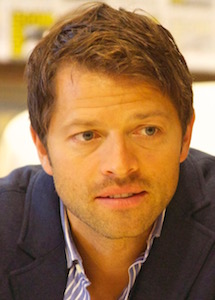 Misha Collins is best known for his role as the Angel Castiel on the CW television series Supernatural. In addition, Misha has been seen on Nip/Tuck, CSI: NY, Without a Trace, Monk, NCIS and ER. With all his TV experience, Misha is no stranger to the voice-over mic. That’s a good thing since he had two days’ worth of dialogue to record for this year’s GISHWHES hunt. Along with all the scavenging fun, Misha has added another dimension to this year’s hunt. Through a phone-based voice tree that contestants navigate, they must choose an answer (the leaves) to the questions (the branches) posed throughout the hunt. For each "branch" (a question, statement or problem) there would typically be three to five "leaves" (the answers). You are then directed to a new branch depending on which leaf you choose. All of the branches and their numerous leaves had to be recorded, edited, labeled and output in a final form for the phone system. With hundreds of audio files, we had to be very careful and organized in our file management and naming. With the many hours of final edited and output audio completed and loaded up, the phone tree will be a great, new challenging and intriguing addition to the hunt.